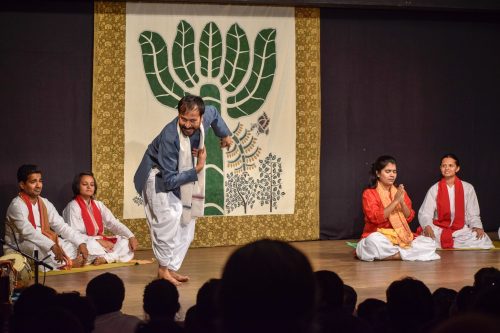 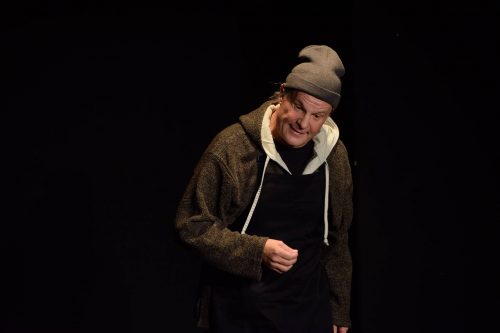 The workshop was facilitated by Bengali theatre director and practitioner Mr. Subhendu Bhandari and Rituparna Biswas. The workshop explored psychological movements that awaken the actor’s inner life. It also dealt with methods of creating bold characters through gestures and movements. Bhandari asked students to form a circle and explained that everyone is equal just like the circle because one can’t define its starting point and ending point. The circle does not have one leader, everyone is leading the circle.

He conducted an exercise on psyco-physics with which he shared that one should keep things simple and easy. When an actor works with his brain and heart, he should be aware about his sixth sense. Every human being is an actor in his childhood because we see children copy or mimic other people or things very easily and with conviction. Actors should also have observing capacities like children. Every actor has his own layers and when an actor studies a character or performs the act, he should open his layers for better performance. Actors should cultivate the capacity to change gestures according to situations and surroundings.

First day was about rebel, second about family, religion and the third day turned out to be all about feelings residing deep within and dilemma. Today, two plays were read. Antayatra (Dir. Supriya Gosavi, Vasudha Creations) and Chahul (Dir. Nitin Javale, Mukhvate)

Antayatra is about strained and complicated relationship between a mother-daughter pair. Geeta is well established writer. She’s a strong headed woman living life on her own terms. Sayali is her daughter who never received her love as ahe desired. This relationship never seems usual but not unusual too as we know and understand the reasons behind their behavior. There were flashbacks, time jumps
defined by music. Layers of character were well defined. We understood the reasons and motive behind their actions. Antaryatra, a love-hate story about Geeta and Sayali provided well enough emotional turns and twists, even at the end.

Chahul is a story of newly settled couple, Makarand and Madhvi. They are victim of a consumer based society but
are also an integral part of it. Makrands boss asks him for his wife for a night in exchange of promotion i.e. money. Chahul takes place in between the evening and late night where the couple is reaching towards their decision. Both the actors of Chahul understood the depths
of their characters very well and their conviction was the proof. The effects of their parents on them, their frustration
over never ending requirements of ideal lifestyle, their realization of what they have turned into and their final
decision were portrait beautifully. We feel sorry for Madhukar and Madhavi but then we realize that their story is not rare, just the scenarios are different.

The Playful Process of Painting’ focused on developing critical thinking, creative expression and essential learning skills through the arts. The workshop explored the visual and performing arts together, looking at a wide variety of artist techniques and styles. Within the visual and performing arts, it looked at a range of potential mergers and connections to explore a wider universe.The facilitators conducted several theatre games to improve bodily coordination and mental attention.